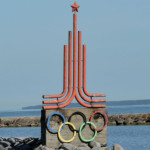 July 19th 1980 – the Olympic Fire arrived to Tallinn, the sailing city for the Moscow Olympic Games. Arrival ceremony was held on the square in front of the town hall.

July 20th 1980 at 15.59- Arnold Green, the main organizer of the regatta, announced the sailing regatta of Moscow Olympic Games to be open.

At 16.22 Vaiko Vooremaa, 17-years old student from Haapsalu, who had won Juniors’ World’s Championships in ice sailing and was the USSR Youth’s Champion in sailing, lighted the Olympic Fire.

Arnold Green and Gunnar Ericsson, the official representative of the International Olympic Committee, welcomed all participants, organizers, visitors and local people. Mi?kas and Vigris, mascots of the Olympic regatta, were entertaining people on the opening ceremony. They become very valuable Olympic souvenirs.

Finn yacht class had most competitors, from 21 different countries. Finn has been the only one-man yacht on the Olympic regattas since 1952.  It is the smallest but the sportiest Olympic vessel.

470-s participated on the Olympics for the second time in Tallinn and this class had competitors from 14 countries.

The Flying Dutchman became an Olympic yacht in 1960. Participants in Tallinn were from 15 countries.

Soling had its Olympic start in 1972 in Kiel. Competitors were from 9 countries on the Tallinn regatta.

The fastest Olympic vessel Tornado sailed in 1976 in Kingstone for the first time. There were participants from 11 different countries in Tallinn.

Star is the oldest Olympic yacht; the first time was at the 1932 Olympic Games. Participants from 13 countries were in Tallinn.

The Olympic Fire was burning in Pirita for 10 days. Competitors from 23 countries participated in the Olympic regatta in Tallinn. Sportsmen from 12 countries went home with medals.

The regatta succeeded- this was the common opinion of competitors and organizers.

July 30th 1980– the lord Michael Killanin, the president of the International Olympic Committee announced the Tallinn Olympic regatta to be finished.

21 years TOP was in the ownership of the state. From March 2002 TOP has private ownership. Today TOP`s 100 % share owner is Regati Valduse OÜ.